Successful home race for GRT in the DTM at the Red Bull Ring. The Lamborghini team from Austria once again proved its competitiveness in the top-class championship with their four Lamborghini Huracán GT3 EVOs in Saturday's race. Mirko Bortolotti claimed his fifth podium of the season in round 13. On his way to third place, the Lamborghini factory driver also set the fastest race lap for the fourth time this year. In the overall standings, he is now only 20 points behind the leader. Rolf Ineichen and Alessio Deledda saw the chequered flag in 18th and 21st place in the field of 27 GT3 cars. Clemens Schmid had to end his race early.

In qualifying on the 4.318 km long Red Bull Ring, Mirko Bortolotti once again gave the team led by team principal Gottfried Grasser a promising starting position. The 32-year-old Italian qualified on the third row of the grid. Rolf Ineichen continued his strong performance from Spa-Francorchamps, where he had set the fastest lap of the race. The Swiss was only one and a half tenths off the top-ten and claimed a spot in row eight. After his fastest lap in practice on Friday, Clemens Schmid was unable to put together an optimal lap and finished one position behind Rolf Ineichen. Alessio Deledda secured row 14.

In the race over the distance of 55 minutes and one lap, the heat was on from the very first moment, in typical DTM fashion. Mirko Bortolotti proved to have the perfect eye in a hard-fought starting lap and made up three positions with determined moves. Driving in third place, he continuously put pressure on the leaders. In a tactically executed first stint, he and the leading duo pulled away from the rest of the field.

The strategists around the #63 Lamborghini Huracán GT3 were looking to decide the battle for second position with an overcut on the 27th lap. A small problem with the front left wheel change thwarted the plans. However, the time loss only had an impact on the stopwatch. On the circuit, Mirko Bortolotti was still third. He used the new tyres and clean air to set the fastest lap of the race in 1:29.354 minutes. After 38 laps, he crossed the finish line in third place and received the bonus point for the Fastest Lap on top of that.

Rolf Ineichen experienced a challenging Sunday. After his strong qualifying, he dropped back to 19th position at the race start. In the following laps he worked his way back up to 16th position. In heavy traffic, the #19 crew decided to make an early pit stop to attack the direct competition with an undercut. However, the tyre change did not go as planned and the 44-year-old found himself in the shallows of midfield in the second stint as well. Without the opportunity to attack at the front, he crossed the finish line in 18th place.

For Alessio Deledda, his first appearance in a GT3 car at the Red Bull Ring was another instructive experience. The 27-year-old Italian kept up with the field in the early stages. By the time he pitted on lap eight, he had made up four positions. After the tyre change, he found his rhythm and drove consistent lap times. However, a brief technical problem on the 25th lap cost him valuable time, so that he was no longer able to make any headway. He finished the race in 21st place.

Clemens Schmid was once again in the eye of the storm in the hectic opening phase in the midfield. He came together with a rival in turn six, puncturing his right rear tyre. After an unscheduled pit stop, the 32-year-old Austrian drove a lonely race and matched the lap times of the top-five. However, it was impossible to recover the lost time in a normal race without full course yellows. The team therefore decided to stop the car early on the 25th lap.

Mirko Bortolotti: "It was a very good Saturday for us. We got the maximum out of it starting from sixth position and third place is a strong result on a track that on paper doesn't suit us. It was a really great performance by the whole team. The time loss at the pit stop was unfortunate, but it didn't cost us any positions in the end. These things happen to even the best crew. I'm proud of my guys and that we came back with a strong result after two difficult weekends."

Rolf Ineichen: "Qualifying was great. I was really happy with my lap and the car was very good. Unfortunately, things didn't go in our favour in the race. The start was chaotic and I lost a few positions. We were doing well after that, but unfortunately the pit stop didn't go smoothly. As a result, our strategy didn't work out and I was stuck in traffic. In the second half of the race, I was lacking a bit of pace. I just tried to get the maximum out of it and it wasn't possible to do more. But we learned a lot in the race and feel we are in a good position for Sunday."

Clemens Schmid: "It was a difficult day. I let the team down in qualifying because our car was definitely better than my grid position. In the race, unfortunately, we were robbed of the chance of a good result early on. At the start, the car in front of me put on the brakes and I lost a few positions because I had to go off the throttle. Then there was an unfortunate contact with Dennis Olsen. It was a classic racing incident, as they sometimes happens on the first lap. After we changed the damaged tyre, my pace was really good. The race outcome is disappointing, but we have a great race car. On Sunday we have to make sure we have a better starting position."

Alessio Deledda: "We made progress again in qualifying. The gap was less compared to a fortnight ago. On my last lap I was improving when a technical problem occurred and I had to abort the run. But I had a good feeling and was happy with that. In the race I had a good start and kept up with the field in the first half of the race. Then the same issue as in qualifying occurred and I dropped back. It's a bit of a shame because I was catching the two cars in front of me. But for the second race I am optimistic that we can have a piece of the action."

Gottfried Grasser, Team Principal of GRT: "A podium at the home race is a great result and we are very happy with it. There were a few little things that we can take with us and learn from. But overall, the team did a mega job. Mirko drove fantastic and scored valuable points with his third place. It wasn't an easy Saturday for the other guys. Clemens was unfortunately involved in a collision early on. We then used his race to collect data. Rolf struggled a bit in traffic after his great qualifying. Alessio's learning curve was once again very encouraging. He was on it in qualifying. If he can find that extra tenth or two, he'll be right there with the other guys. Overall, it was a good day and we are looking forward to tomorrow." 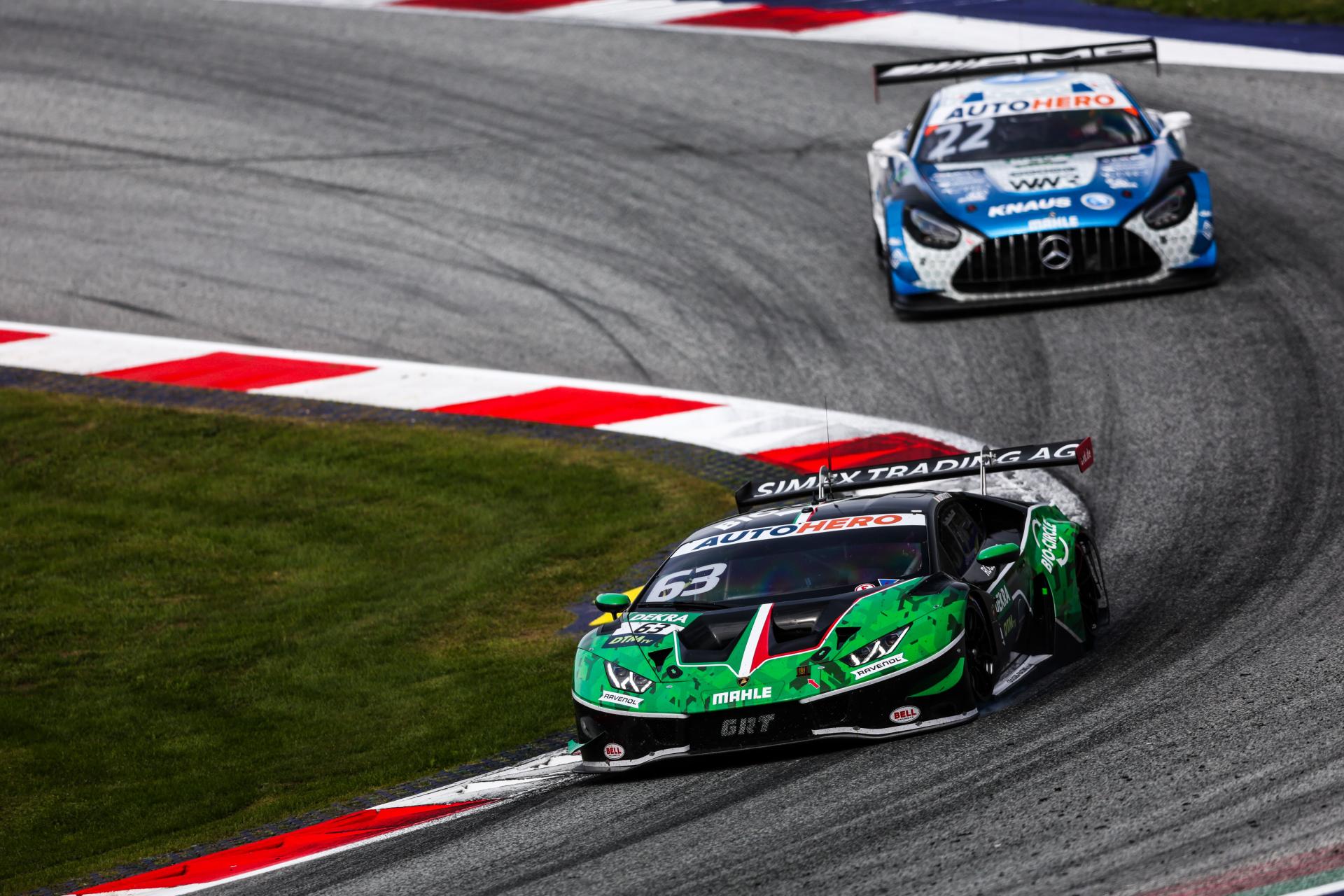 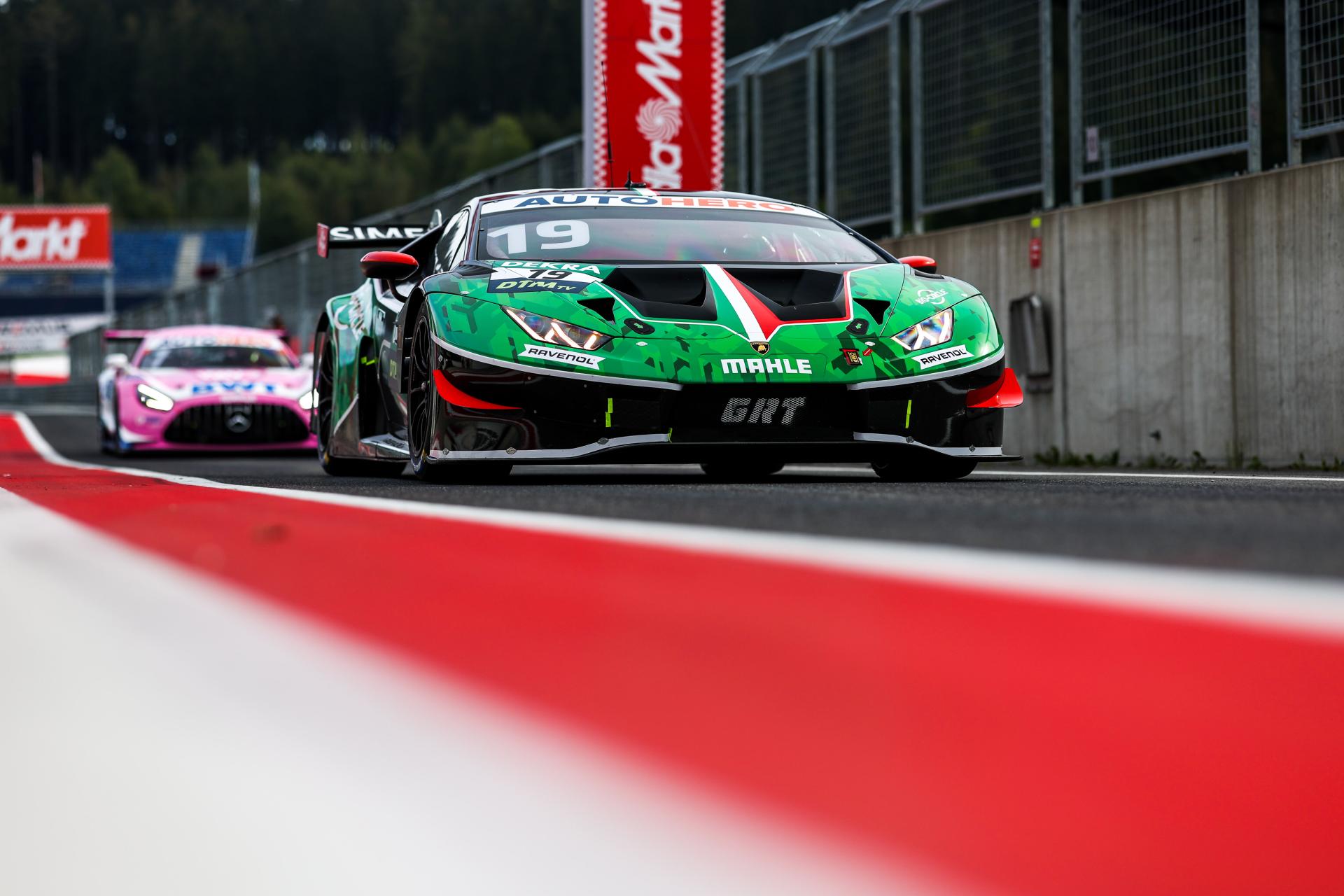 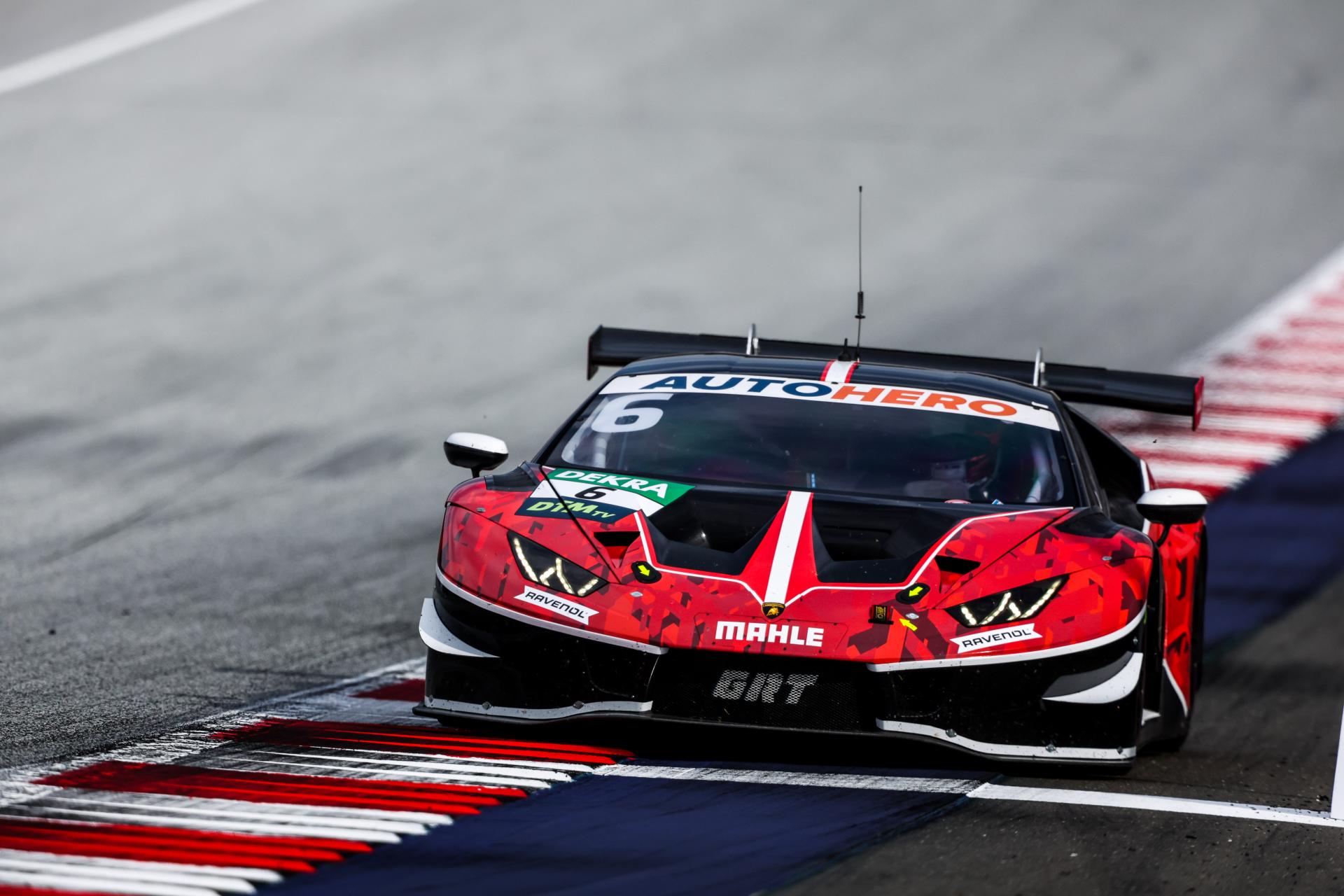 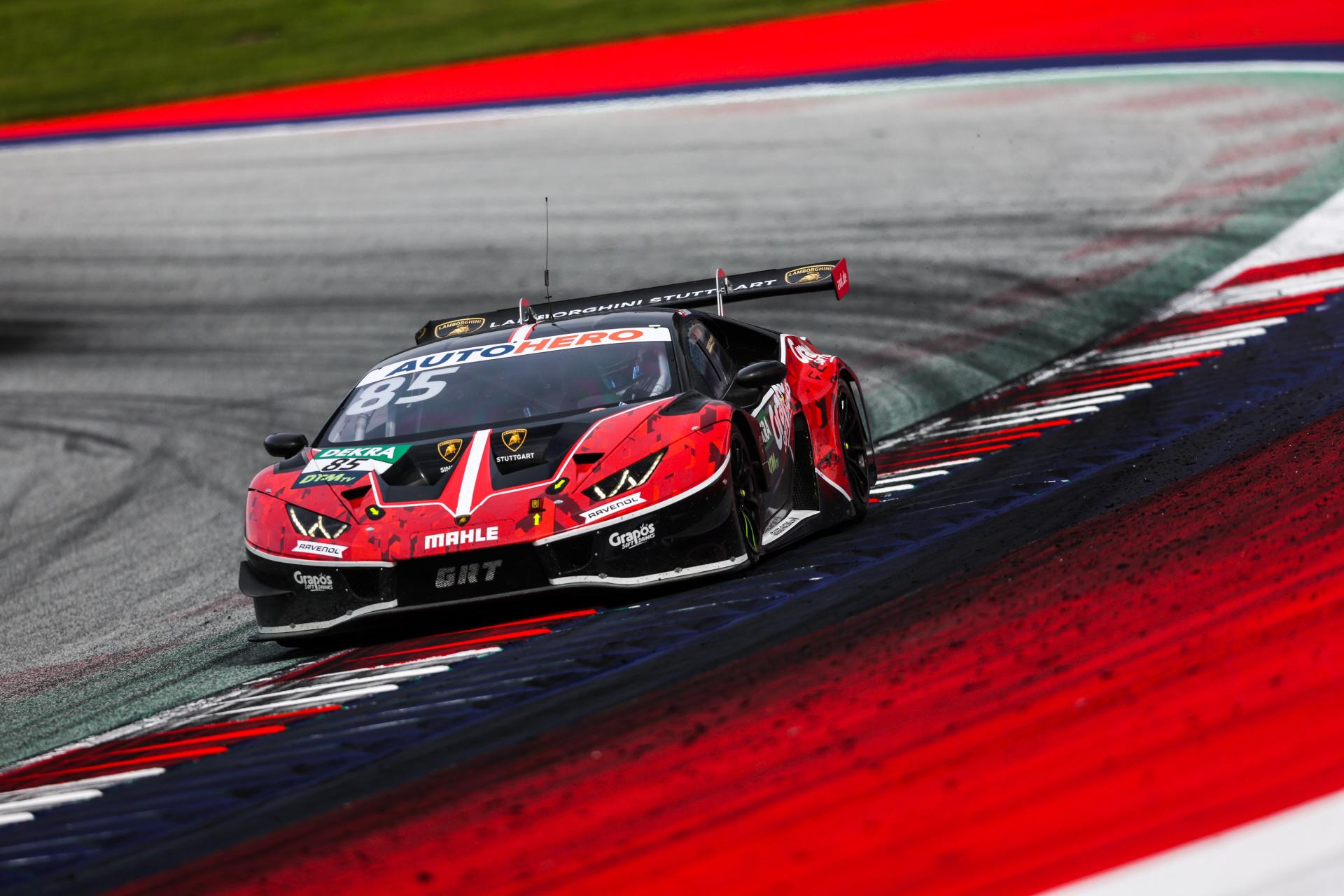 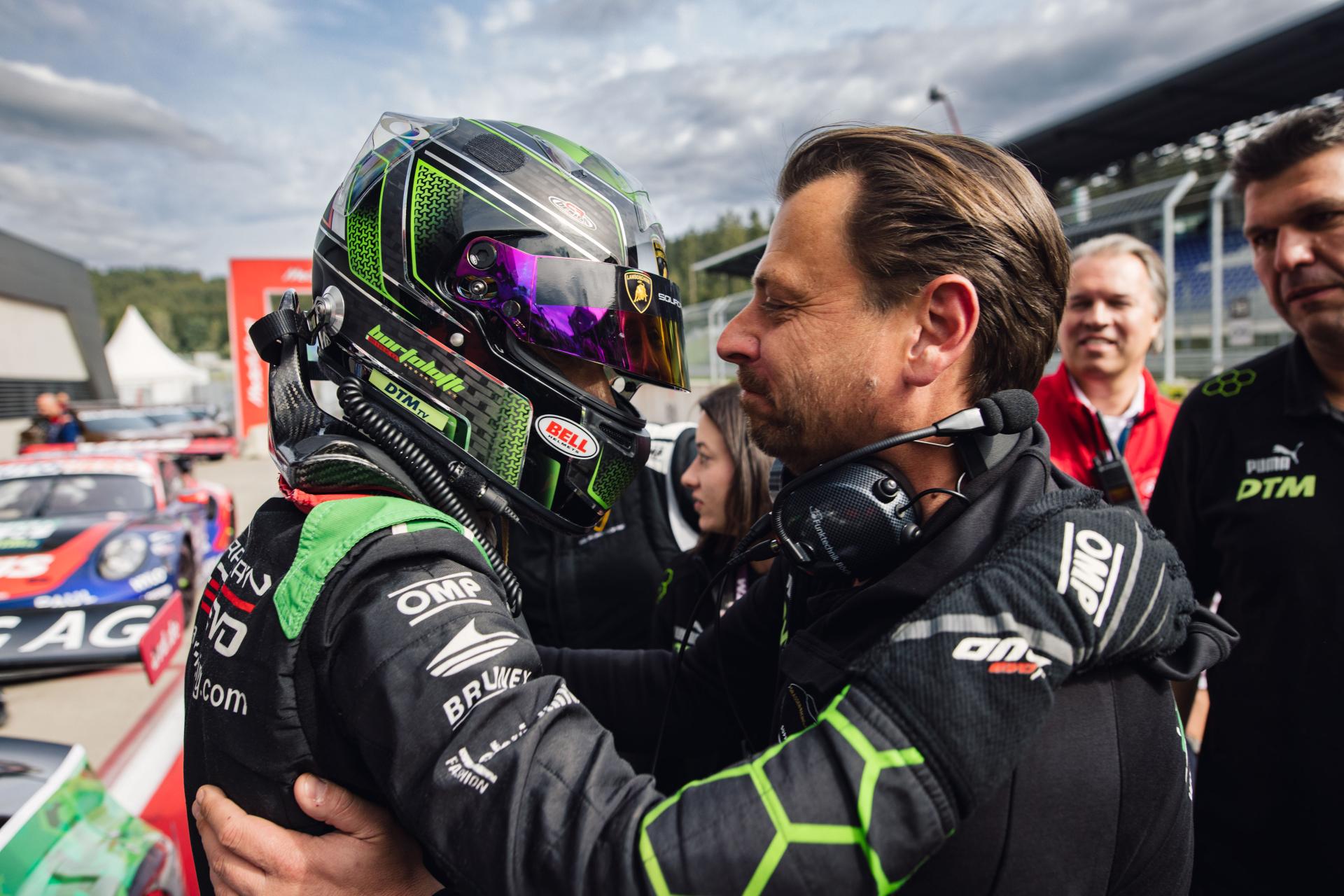