Last minute points for GRT at the DTM in Spielberg: Mirko Bortolotti makes up ground in the championship

Grasser Racing's DTM home round came to a fitting conclusion in the second race at the Red Bull Ring. Chaotic weather turned the Sunday into an exciting gamble for the Lamborghini team from Austria. Their strategy proved to be successful in the end. Having started from 22nd on the grid after a difficult qualifying, Mirko Bortolotti scored four valuable championship points driving his Lamborghini Huracán GT3 EVO. With the flawless tactics, the Lamborghini factory driver provided a spectacular showdown when he overtook two of his rivals two corners before the finish to claim eighth place. In the overall standings, he is now only 16 points behind the leader ahead of the finale at the Hockenheimring. Clemens Schmid, Alessio Deledda and Rolf Ineichen finished 18th, 21st and 23rd respectively.

Heavy rain had set the 4.318 km long Red Bull Ring under water on Sunday morning, so that extreme conditions prevailed right from the start of qualifying. In the course of the 20-minute session, aquaplaning caused several accidents, which resulted in three red flags. The GRT quartet stayed on the track but could not find their rhythm due to the interruptions. Clemens Schmid was ultimately the best-placed Lamborghini driver in the field of 27 competitors on row nine. Mirko Bortolotti and his crew repeatedly tried to get more performance out of the car with setup changes. In the final phase, increasing rain thwarted any chance of improvement and he remained on row twelve. Rolf Ineichen and Alessio Deledda achieved starting positions one row behind.

The race over the distance of 55 minutes plus one lap provided an unprecedented weather roulette in which Mirko Bortolotti once again showed an excellent performance. At the time of the start, the rain had stopped, but due to the still alarming amount of water, the race only got under way after two formation laps. The 32-year-old Italian made best use of the wet tyres in the first stint, while his strategists timed the switch to slicks just right. On lap 24, he put on the dry tyres and began a phenomenal recovery from 18th place. Within nine laps he had fought his way back into eleventh position. In a nail-biting finish, he overtook two rivals in the penultimate corner to take eighth place.

DTM rookie Alessio Deledda again showed big progress on the penultimate weekend of the season. Behind the wheel of the #6 Lamborghini Huracán GT3 EVO, the 27-year-old Italian kept up with the field in difficult conditions. With ten laps to go, he was 16th in the battle for the midfield. On the wet tyres he had no chance to fight his rivals at the end, as their slick was the better tyre in that moment. Thus, he was classified 21st after 35 laps.

Rolf Ineichen also experienced a busy first half of the race. The 44-year-old had started last due to a penalty from the previous day. In a long first stint, he was up to 18th place for a while, but on lap 21, the pitwall decided to change the #19 Lamborghini Huracán GT3 EVO to slicks first. In the second half of the race, however, the Swiss didn't make any further progress, so that he was flagged off in 23rd position.

For Clemens Schmid, the hoped-for points result at the first DTM home race also failed to materialise on Sunday. After the 32-year-old Austrian had started the weekend with the fastest time in practice on Friday, he also struggled with the balance in the rain. At the start of the race, he held his own as the best-placed Lamborghini driver in the field until an incident on lap eight dropped him back to 23rd position. From there, he as well fought his way back and was running in 14th place in the second half of the race. With a late tyre change to slicks, he eventually finished 18th.

Mirko Bortolotti: "The conditions in qualifying were more than borderline and it should not have taken place under these conditions. Cars went off in the middle of the straight and they still didn’t stop the session. It was no longer racing, it was just survival. We didn't go out again at the end because we didn't want to risk our car. Safety should have come first in this weather. As a result, we had a very difficult starting position with 22nd on the grid, but with the right strategy we delivered another perfect race. The team did a mega job and eighth place was more than expected."

Rolf Ineichen: "It was another difficult race. In the dry we had great pace all weekend, but in the rain we didn't find the optimal setup. In the race, the pit stop was useful to gather experience for the team strategy on the dry tyres. That certainly worked out, but I'm not satisfied with the result. In Hockenheim, we want to finish the season on a high."

Clemens Schmid: "I had definitely hoped for more from the home race, but it wasn't to be in the end. The conditions were very difficult for all of us in qualifying and we got the maximum out of it with 18th place on the grid. In the race it was wild as usual and I had to fight my way back several times after incidents. The strategy was good, but of course the result was not what we had imagined. Nevertheless, we are taking a lot of positives from the weekend. Hopefully things will eventually go in our favor at Hockenheim."

Alessio Deledda: "The race was really fun. I felt very comfortable in the wet until the pressures in the wet tyres were a bit too high. We then changed tyres early and I was running well again on the second set of tyres. Unfortunately, it dried out at the end, which caused me to lose a few positions. If it had stayed wet longer, a much better result would have been possible. All in all, I am still satisfied with my race."

Gottfried Grasser, Team Principal of GRT: "Considering our starting position, we made the best of the race. It was an absolute tyre gamble and we made the right decision with the slicks. It was a bit of a pity that it didn't dry out earlier, because otherwise we could have done even better. On the other hand, Mirko got a very important result for the championship with his strong last lap. Alessio today showed by far his best race in the DTM. He was right there with the other guys, gained positions and set fast lap times. For Rolf and Clemens, it was mixed feelings on an otherwise strong weekend. They lacked a bit of pace in the rain. All in all, we are very happy with our first home race in the DTM. The best thing is that it will be a real thriller at the finale in Hockenheim. The title hunt is completely open and we are looking forward to the showdown." 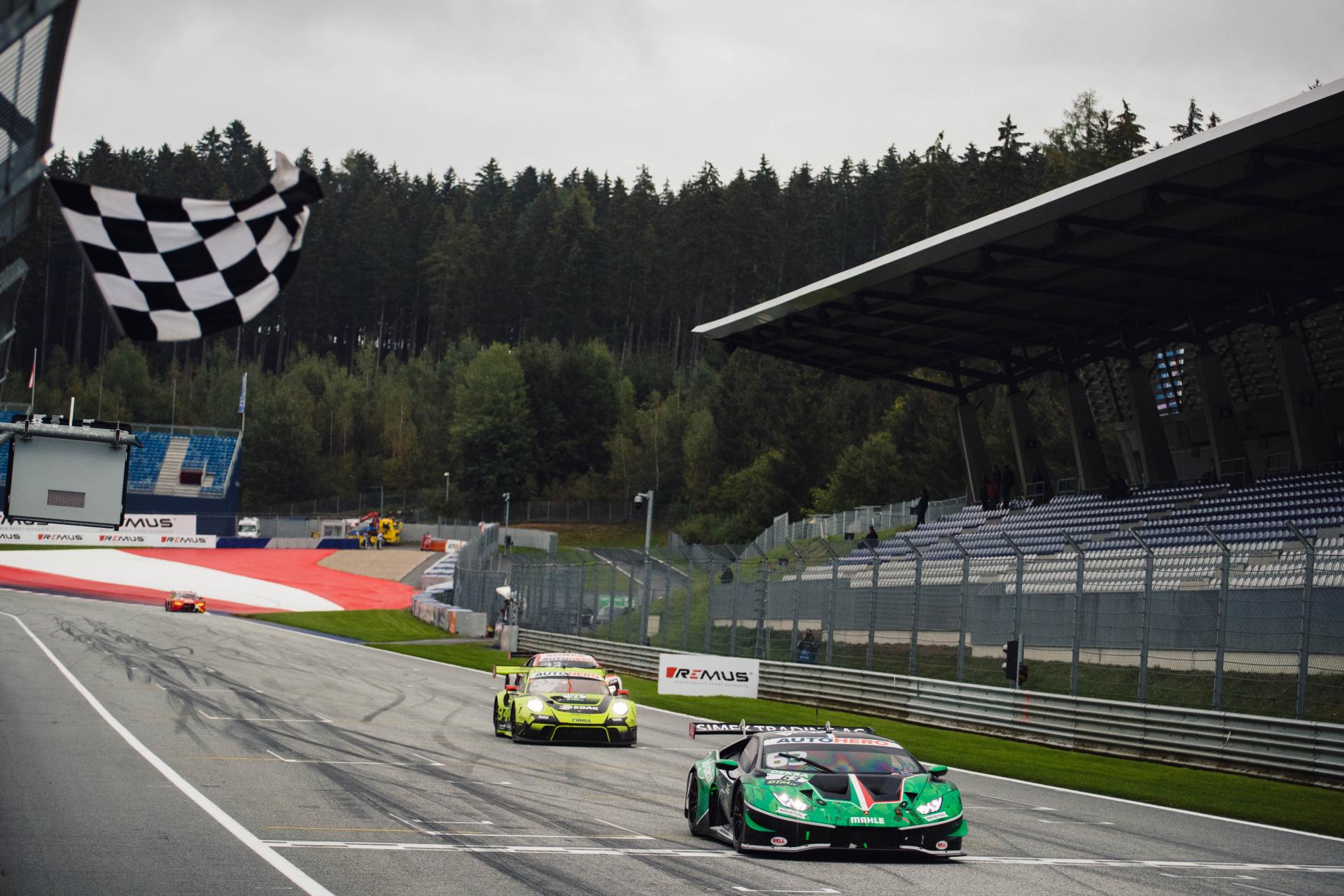 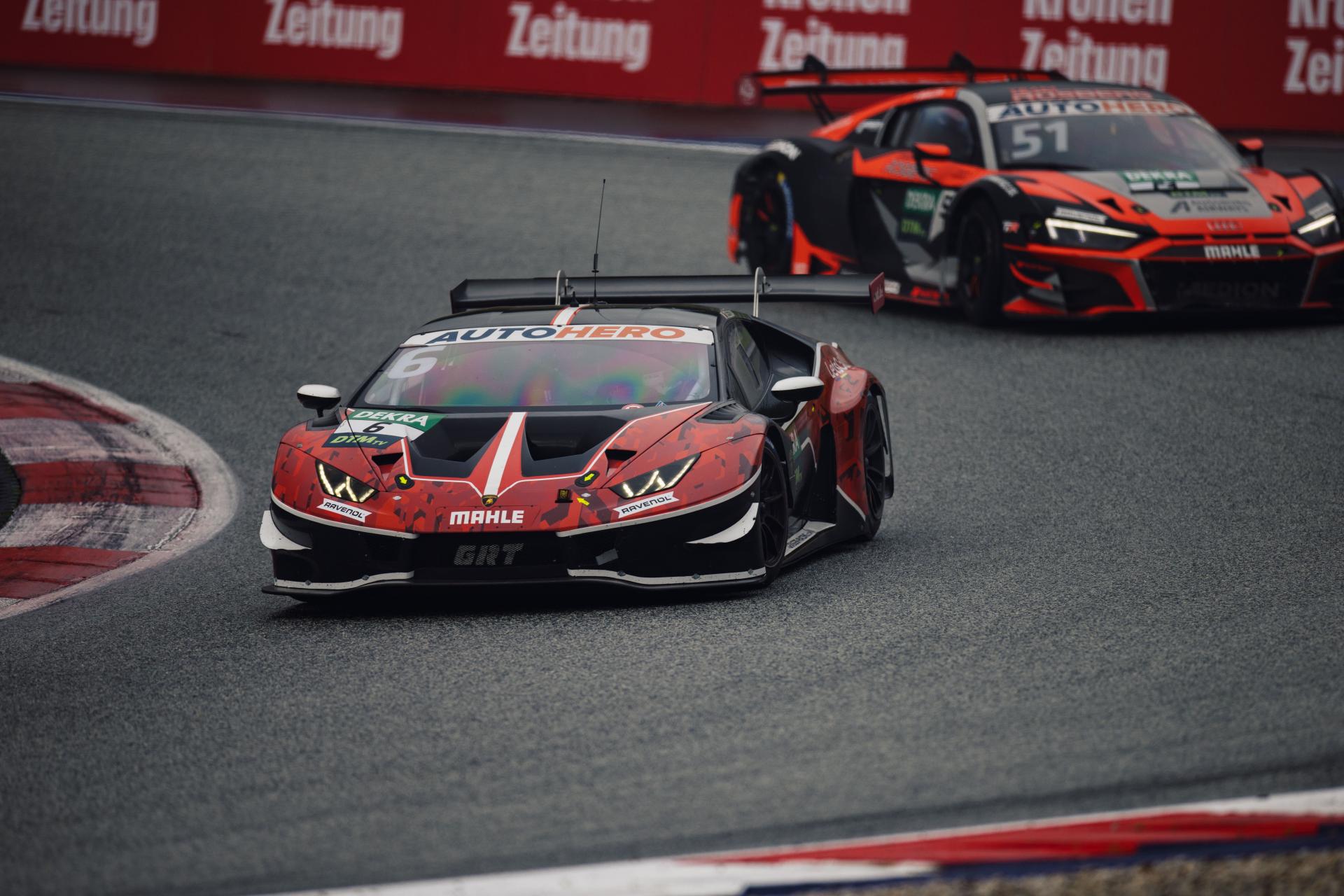 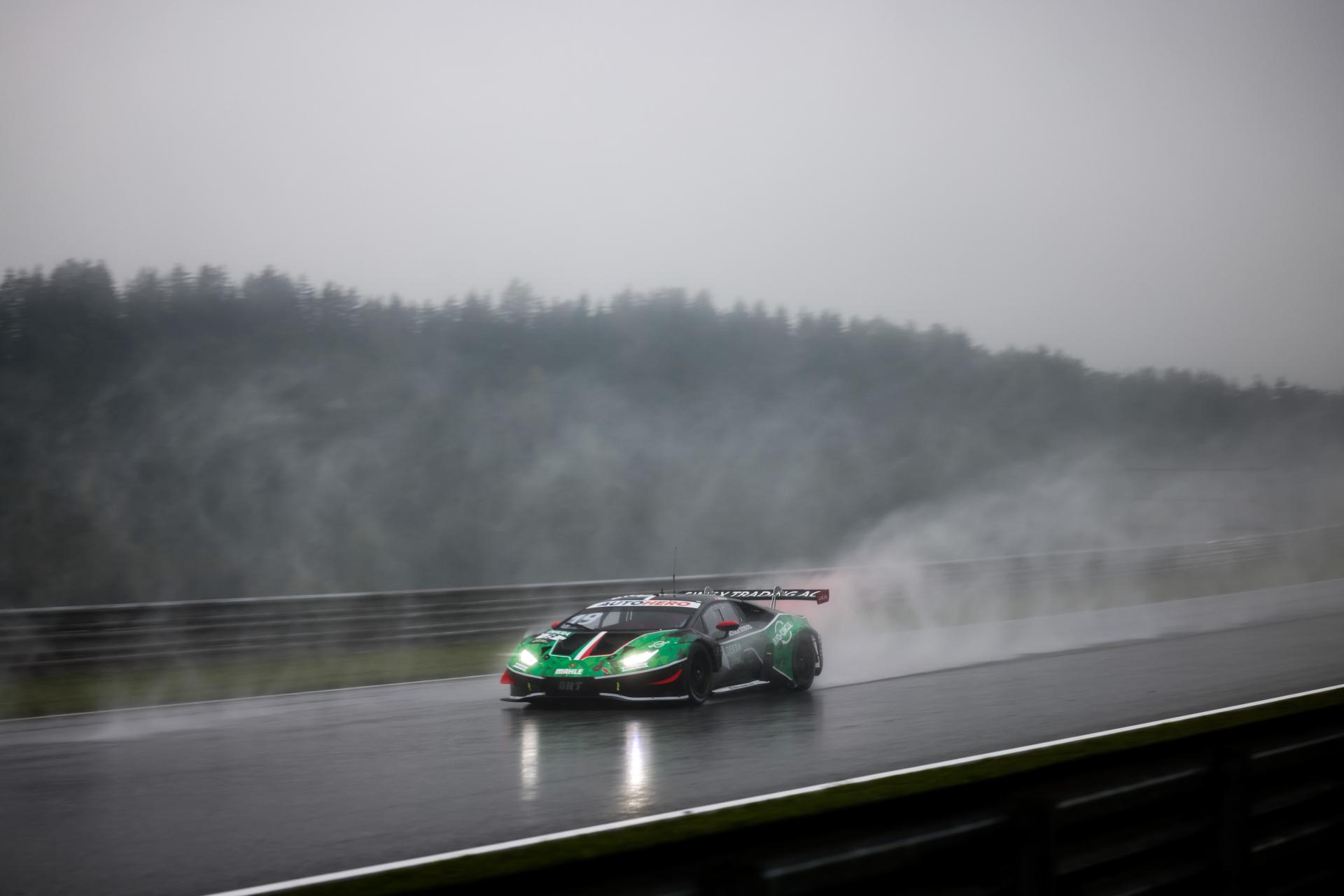 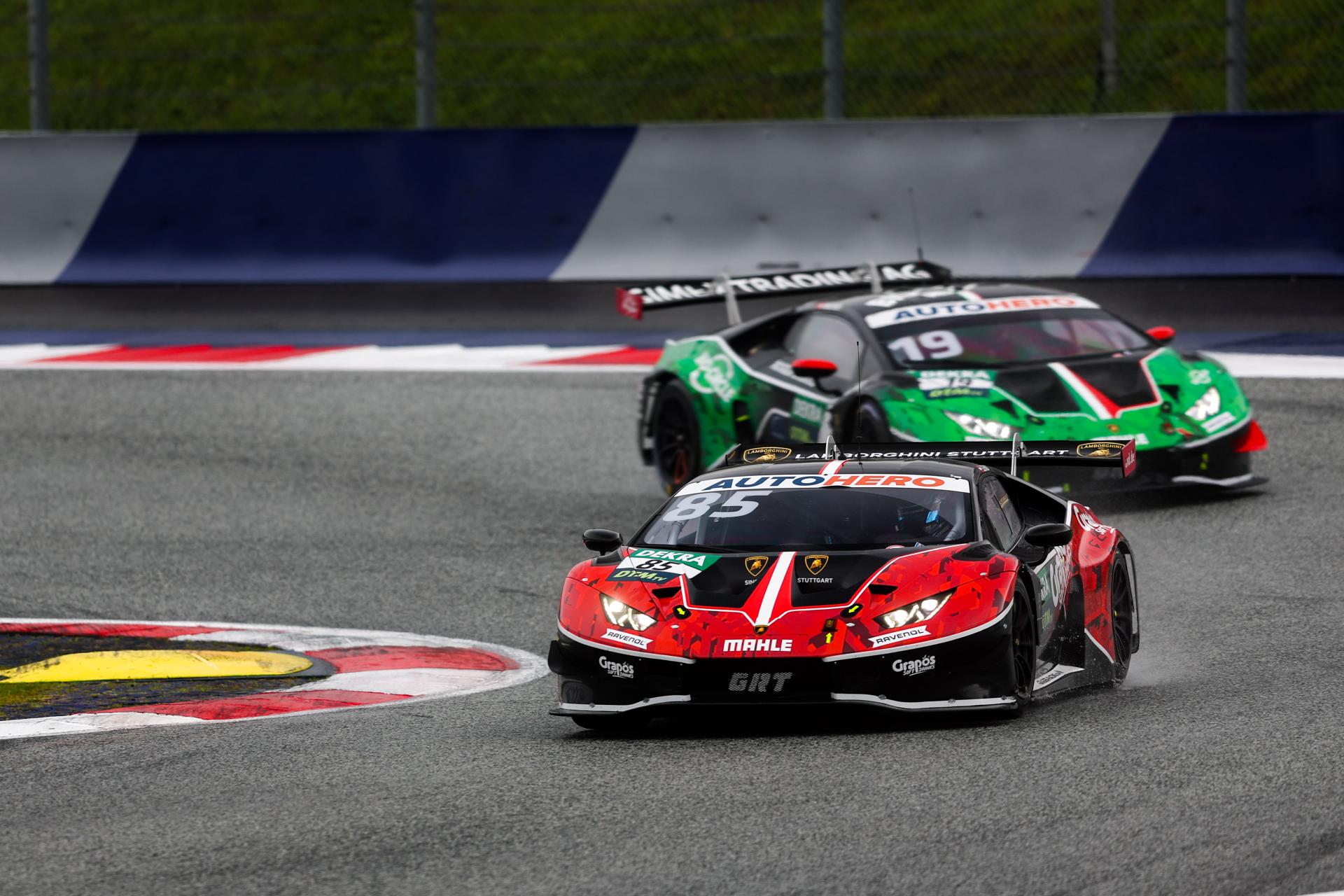